Which Tour to Choose

The Height of Tornado Season

So now that we have the “where,” we need to examine when to go storm chasing. As previously stated, we conduct our storm chasing tours during the height of the Great Plains Tornado Season. Here are a series of images from the Storm Prediction Center that show when the most storms and tornadoes occur.

Although the given graphic here shows data from 2008, it is fairly representative of a typical year.

From January to April, most tornadoes happen in the southeastern part of the United States along the U.S. Gulf Coast. Meteorologist Allen Pearson coined the name Dixie Alley for this region after a tornado outbreak on February 21, 1971.

This southern region of the United States has terrain that is bad for storm chasing. A combination of hills and thick trees makes it nearly impossible to see storms at a distance.

This is also a contributing factor to why storms are more dangerous in the southeast than in the Great Plains. Kansas residents can see a storm while it’s still in a neighboring county. Mississippi residents can’t see a storm until it’s practically in their front yard.

In late April through to late June, the severe actively typically shift into the Great Plains. This is due to the jet stream which tends to dip into the plains bringing with it severe storms.

As you can see from the graph here, April through June is fairly consistent with its number of daily outbreaks. This is the peak of the spring tornado season in the Great Plains. We offer our tours during this peak season due to the best chances of a tornado event on any given day. Any day from March 20th to June 15th has equal chances of witnessing a tornado.

We can also see that after about the 3rd week of June, the number of outbreak days falls off sharply. The reason for this is once again directly related to the Jet Stream. As a result, it begins to become more linear at higher latitudes as it moves into the Canadian Prairies.

After July, most of the tornado events in the United States are related to tropical storm systems. Tornadoes associated with tropical storms are difficult to see. These short-lived events occur in densely populated coastal areas. As a result, they’re not chasable storms.

Current technology and understanding allow us to forecast severe weather up to 48-hours with the best results. In the 72-hour to 96-hour range, we can narrow down a particular region. For example, we might be able to say we’ll expect to chase storms in Colorado based on a 72-hour forecast. However, at the end of that 72-hour period, we might end up in Texas instead. 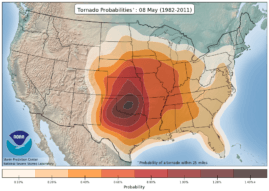 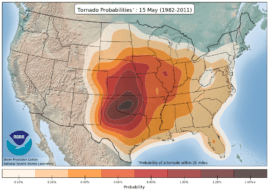 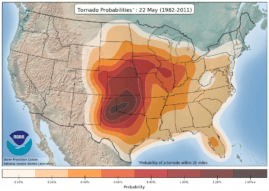 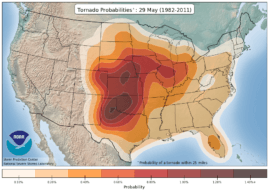 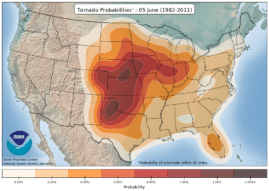 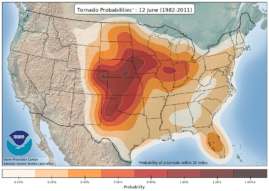 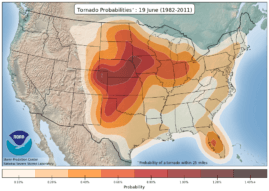 As you can see from the graphics above, from May and into June, the probabilities shift to the north. Therefore, choosing a tour during an earlier week in May, it’s safe to say that it is probable we will be conducting storm chasing activities in places such as the Texas Panhandle region and central Oklahoma.

If you were to choose a tour in late June, it’s probable to say we’ll be conducting our storm chasing activities in areas such as northeast Colorado and throughout Nebraska. This all has to do with trends relating directly to the Jet Stream, which dips into the Southern Plains during the early part of the season and retreats to the Northern Plains during the later part of the season.

On the next page, we’ll discuss storm chasing in the North vs. South of Tornado Alley.