A long intense chase day that ended with a beautiful supercell thunderstorm that produced a funnel, but no tornado.

The day started in Oklahoma City. The tour group met fairly early at 7:00 am in the lobby. We did our initial forecast assessment and mesoanalysis, which told us we’d once again be traveling to the Texas Panhandle.

Later that morning, the Storm Prediction Center issued a Convective Outlook that covered West Texas, portions of northwest Oklahoma and nearly all of Kansas. On days with such a large area of convective possibilities, the forecaster has to look for what is different about a particular given area.

In this case, it was the Dryline in the Texas Panhandle intersecting with a warm front. Monitoring surface observations from mesonet weather stations helped us to pinpoint where the dry air layer from New Mexico was punching furthest east. That area was near Limbscomb, Texas.

By late afternoon thunderstorm development was well underway with strong lift near the triple-point. Moisture was limited, a recurring theme over the past week. It was likely the limited moisture that prevented this supercell from producing a tornado.

The highlight of the day was a large cone funnel that formed and began slowly filling in with condensation as it tried to touchdown. The funnel lasted for several minutes but failed to transform into a tornado. 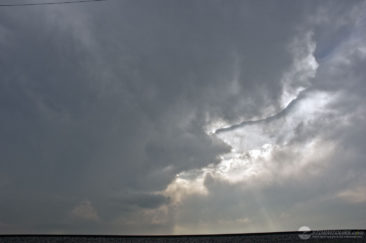 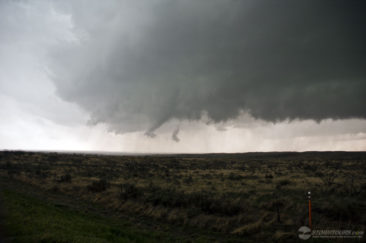