Our target area today was Wheatland, located in SE Wyoming.

Wyoming is a bit difficult to chase in due to terrain and extremely limited road options, but it can be done and is an absolutely gorgeous country. Due to its elevation, the storms that happen here seem almost magical with very little precipitation around the storm bases, making this ideal for photography.

We intercepted two different supercells today and had a visual on a distant third, which we could see under the base for a very brief time. Upon arriving, we were able to see a quick tornado under that third storm from the front of the van before losing sight of it due to terrain.

The tornado that we saw was on the edge of the horizon and thus appeared very small from our viewpoint.

Later confirmation would tell us that the tornado was 3-miles south of Savageton, our viewing point was at the intersection of I-25 and US1 where we were following an LP storm that was moving nearly due north.

After photographing the storm and playing in some hail, we decided to let this storm go and drop back to the south again to reposition on another storm closer to our original target area.

When we arrived on the storm near Wheatland, we followed it north towards Glendo State Park, however, due to the hour and loss of light, I decided to set up for lightning photography opportunities before calling it a day. 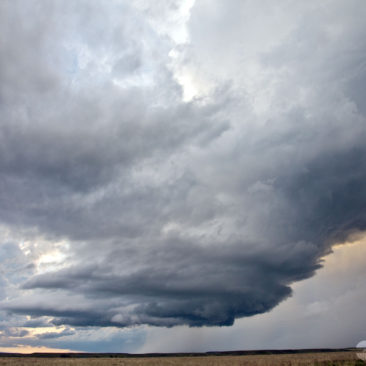 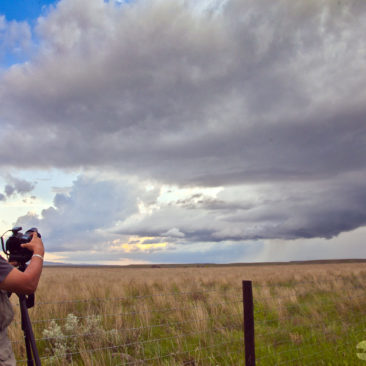