The tornado that struck Greensburg, Kansas on the night of May 4th was the first ever to be designated as an EF-5 on the Enhanced Fujita Scale.  It was one of the largest and most violent tornadoes in recent times, if not in all of Kansas state history.  The tornado’s winds were the fastest rotational winds ever measured by doppler radar on Earth.  The tornado killed nearly two-dozen people in Kiowa County and injured nearly 70 others.  It forever changed the lives of everyone who lives in Kiowa County and it will be a night that I will never forget.

After intercepting a long-lived tornado in Western Oklahoma earlier in the day that formed off the nose of a dry punch, we followed the cell to the northeast and eventually ended up on the Oklahoma/Kansas State Line.  The storm made it to the state border just as sunset and a low-level jet began to intensify the supercell once again.  CAPE values well exceeded 3500 j/kg, and our dew point temperature near Coldwater, Kansas was 66 degrees F.

The storm remained tornado warned although we hadn’t had a visual confirmation of a tornado for nearly an hour.  Due to some customers in the van who didn’t feel comfortable chasing at night, I assured them that we would keep our distance and trail the storm from the south as it moved to the north/northeast.   The night and the storm was nearly pitch black with frequent lightning, I was working hard trying to look for any contrasted areas on the storm’s base during the lightning flashes and starting/stopping my video camera often to try and pause the video on the camera’s LCD screen for better clarity of what might be occurring several miles ahead of us.  We were also monitoring several different frequencies on the radio that included 146.550, a popular simplex amateur radio frequency often used by storm chasers, as well as local Kiowa County emergency and law enforcement frequencies.

Tornado!  The tornado quickly formed southwest of Greensburg and the storm track would take it directly into the rural Kansas farming community.  At 9:41 pm CDT the NWS office in Dodge City issued a “Tornado Emergency” for Greensburg, a first of its kind warning with very strong wording designed to immediately get the attention of Greensburg residents urging them to get underground immediately.  The following few minutes were absolute chaos.  There were radio communications being made between law enforcement officers who then went “silent”, it was later discovered that one of them was impacted with a direct hit from the tornado, unfortunately he later lost his life in hospital.  Storm chasers were nearly screaming at each other on the radio, nobody could get a good visual on the tornado.  That is because if you were close to the tornado, you couldn’t see it.  It was several miles wide, at night, and would have appeared to look like a dark wall of rain.  From our position, several miles to the south, we could see it’s shape, just barely, in the dark from the storm’s own lightning illumination.

The post-event damage survey would show that there were several tornadoes on the ground at the same time throughout the life of this storm.  There was the main center of circulation, the wedge tornado that caused the most damage and loss of life, as well as a few satellite tornadoes that formed on the outside edge of the wall cloud and circled the main circulation.

This event was nearly the end of Greensburg.  Despite the hardships and struggles, mourning and loss, the town lives on today.  It became the focal point of “Greensburg, Greentown,” a television series produced by Leonard DiCaprio to launch Discovery’s network Planet Green.  Today, Greensburg is the most modernized sustainable town in the Great Plains. 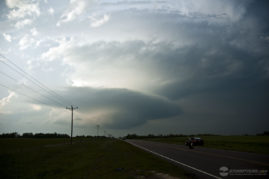 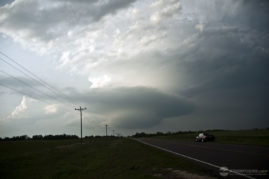 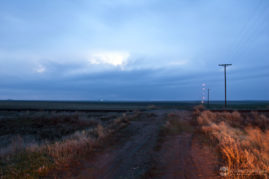 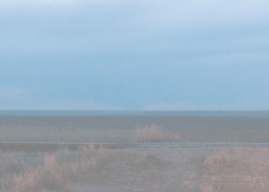