May 23rd included a few surprises. We started the day in Roswell, New Mexico looking for things that were out of this world.

After spending a few hours exploring Roswell, we begin driving towards the day’s target area near Lubbock. A shortwave trough over Arizona was advancing towards the Texas Panhandle.

There was an outflow boundary from earlier convection in Oklahoma that was pushing to the southwest, and dewpoints in the area were in the upper-60s with strong backed winds. MLCAPE values on forecast soundings showed nearly 4000 j/kg, and there was a strong capping inversion.

All we needed was for all these things to meet up at the same place, at the same time, and then break through the cap, and it happened. What we should have been more prepared for, I guess, was the fact that it had not rained in west Texas in quite some time, and with today’s large wind event setting up, we ended up with a haboob and a tornado!

The tornado was brief and happened just a few hundred yards in front of us while we experienced 80+ mph winds along the rear-flank. These winds were dust loaded, it was, to say the least, “insane!”

After the tornado event, we drove into Lubbock just-in-time to watch a wall of dust, that rose at least a thousand feet into the air, envelope the city to near-zero visibility conditions! 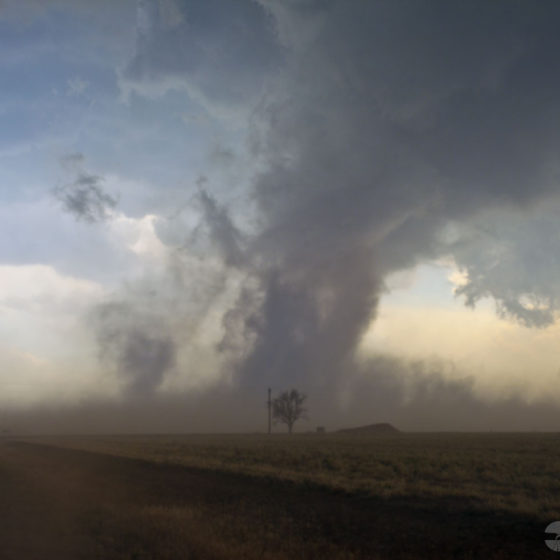