An interesting day unfolded in Baca County, Colorado with one of the most photogenic tornadoes of the year, if not the past decade.  We started the day in Wichita, Kansas where after a morning briefing we were focused on two potential areas of severe weather development for the afternoon.  The first target area was in the Texas Panhandle, the second was in southeastern Colorado.  The two target areas were not far from each other, but far enough that if you pick the wrong one, you wouldn’t have enough time to get to the other.  We headed west to Dodge City where it was decided we would make a final decision on the day’s target area.

At 3:05 p.m., the Storm Prediction Center issued Severe Thunderstorm Watch #238 (not the tornado watch we were hoping for) to the dismay of many frowning storm chasers in our group.  I remained optimistic about the “upslope magic” of eastern Colorado and the Raton Mesa, and as such I determined that the Colorado target area was our focus.  We left Dodge City and continued west towards the Kansas/Colorado border with Baca County being our intended target.

The fastest route to Baca County would take us through the Cimarron National Grassland in southwest Kansas, a grassland of few roads.  As we arrived in Elkhart, a small “blip” appeared on radar in our target area.  After a quick stop at a convenience store, I took over driving duties and proceeded north on Highway 27, and then turned west on Kansas Highway 51 which would turn into a dirt road once we crossed into Colorado in just a few miles.

The base of the small storm started to come into our view and I could see that while it was a small storm, it did have a large lowering.  This little storm was trying!  When we arrived at highway 287 just north of Campo, Colorado we pulled over and watched the south-southeast traveling storm come to us.

Within a half hour, the wall cloud was directly above us, no longer from our (beneath the base) perspective did it have a lowering look to it, but it did for those who had a distant perspective.  The wall cloud was intensely active with a lot of horizontal and vertical motion, my excitement level began to grow.  But, I wanted to get ahead of the storm in case it did tornado, so that our group would have a safe location to view it from, for as long as possible, without having to constantly be on the move.

Back in the van, we quickly traveled south when from the back of the van I heard, “Tornado!”  I turned my head to the right and without a doubt, we had a confirmed tornado moving along beside us.   We stopped quickly to get a few photos, and then proceeded further south as the tornado crossed Highway 287 within a mile behind us.

Once we gained some distance, I pulled over again, and we spent the next 20-minutes in complete awe as we watched this perfect tornado that appeared as if it literally jumped off the big screen straight out of the Wizard of Oz spinning its way through open country right in front of our eyes.  It was an absolutely incredible day that at first appeared dismal with a rather weak meteorological setup and no issue of a tornado watch that turned into pure Colorado magic!

We ended the day with a brief tornado in the Oklahoma Panhandle as the same supercell crossed over the border.  One day with tornado interceptions in two states!  One for the log books! 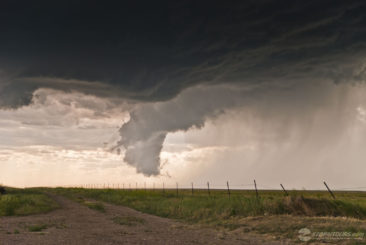 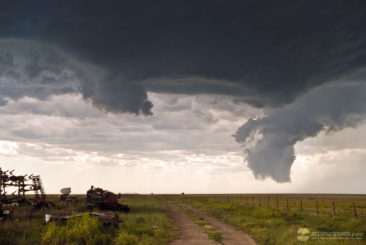 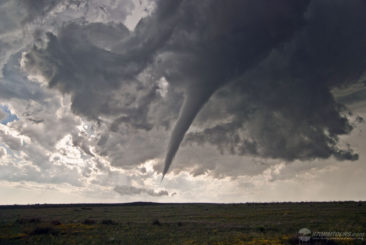 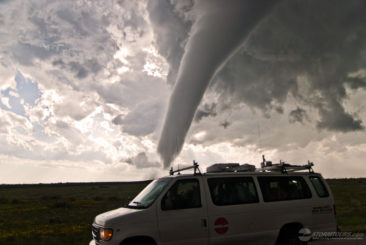 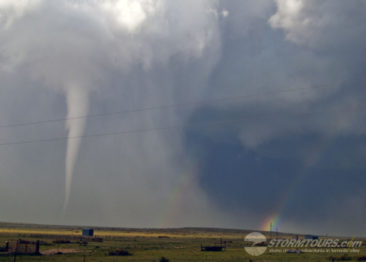 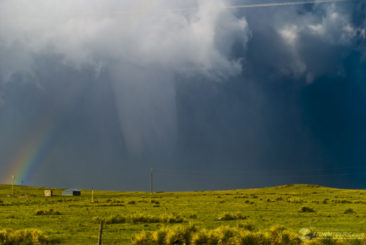 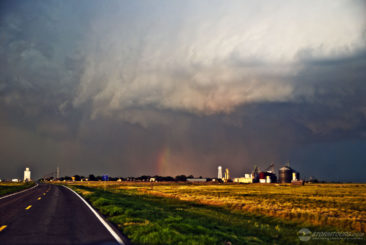