If you live anywhere in the world outside of Oklahoma, May 3rd, 1999 is of no significance.  However, if you do live in Oklahoma, it is one of those dates that you’ll always remember where you were and what you were doing.  The May 3rd Tornado Outbreak is often the baseline when comparing other tornado outbreak events.

This event technically pre-dates our tours But, it was the event that ultimately led to the creation of this company. It was the first time that I took non-chasers along with me on a chase. They helped cover the cost of fuel and I realized that day that there are people who want to chase storms, but lack the experience and want a safe guided service.

As part of my daily routine, I would make a quick check of NWS information. The first thing I noticed this morning was a high-risk area covering central and western Oklahoma. Realizing the significance of the wording in the Convective Outlook, I then spent the morning going over tons of data. I saw a storm chasing trip in my near future.

Storms in Oklahoma generally start in the western part of the state. Or, they begin in the Texas Panhandle and work their way into Oklahoma. Either way, it’s common for western and central portions of Oklahoma to experience isolated supercells. As the evening wears on, these storms lose their energy and a squall line forms. As a result, the squall line then pushes through eastern Oklahoma and on into Missouri and Arkansas.

Being a Tulsa based chaser has its perks. Sure, we have to drive further to get to the dryline where storms initiate. But, once the exciting part of the chase is over, we also get to follow the resulting squall line to Tulsa. Today looked like a good candidate for such a chase. I called two friends who had earlier expressed a desire to go storm chasing and they were in my driveway within 20-minutes. We packed some food, drinks and hit the road towards Oklahoma City.

I left the house at about 11 am, making the two and half hour drive to Oklahoma City.  Once there, I found a public library where I could use their computers to get an update on the weather.  At the time, I didn’t have wireless data options to get any kind of weather info while in a vehicle.  All I had with me was a cellular phone, a radio scanner, and a camcorder. That was the extent of my “set up” in those days.  I decided to drive to Chickasha to wait for further development.

Cutting to the chase, after sitting in Chickasha for an hour, a lot of radio chatter began happening. Severe weather spotters were talking to the Skywarn net controller at the Norman NWS office.  A tornado was in-progress. From the best that I could tell, it was on a heading that would take it just to my north. Within about 5 miles of the Bridge Creek interchange on Interstate-44, I received my first view of the tornado.

The US Interstate system and I have a love-hate relationship. They’re great highways when you need to get somewhere quickly. But, they can quickly turn into a nightmare during tornadic thunderstorms. With exits several miles apart, if traffic stalls then it becomes easy to get stuck. However, Interstate 44 this day would give me the best views of the tornado that I would get all day.

I pulled completely off the interstate to start recording video. It would be the only video that I was able to document this entire event. The rest of the day I was driving and staying focused on safety issues and less worried about my camera.

I watched the tornado as it ripped through Bridge Creek. It ripped through power lines with a large blue arc each time.  My location was about six miles from the tornado and I remember housing insulation falling out of the sky. I had never witnessed an F5 tornado before, but I was sure on this day that I was. The lives of many people would never be the same. Many others would perish into the storm. This was a bad event and it was only going to get worse before this tornado would dissipate. As it moved through Bridge Creek it was going strong with no signs of weakening.

I was listening to KWTV over FM radio by the time I made it to Newcastle, just behind this monster. I remember meteorologist Gary England doing everything he could to enforce the seriousness of this event to his audience. “Get underground now, it’s the only way to survive this deadly storm,” he was practically screaming.

From my viewpoint, Newcastle also took a direct hit. There were more power flashes and every now and then one would illuminate the rain core. When it did, it would give me a glimpse of the tornado it was hiding.

In Newcastle, Interstate 44 turns from a northeast/southwest road into a north/south road. Oklahoma City was in panic mode! The tornado was on a heading that would take it directly into the southern suburbs, including Moore. I weighed my options as I didn’t want to chase this beast through a metro area due to safety concerns.

I drove to Highway 9 and then east over to Highway 177 where I went north in Tecumseh. The tornado made a direct hit on Moore. The south side of the OKC metro looked like a war zone. It was the middle of the afternoon and it pitch black outside due to the 60,000+ feet of clouds overhead.

I caught back up with the storm by the time I made it back to I-44. It was still traveling northeast, paralleling the Interstate. Another supercell had formed near El Reno to the west of OKC and quickly produced another tornado. Another tornado was near Geary traveling northeast towards Enid. The alert tones on my radio sounded the alarm more times than I could keep count.

For a brief moment, I considered turning around and targeting the storm moving towards the Enid area. It would have been possible to get on the southeast flank of that storm by taking Interstate-35 to Highway 60. The problem was, there was another tornado producing storm to its south-southwest (El Reno storm). I didn’t have a good location or heading for that storm. I decided to play it safe and not pursue either storm. It was pitch black outside, getting late and I didn’t have radar in the vehicle. My concern was putting myself in the path of the more southern supercell while trying to view the northern storm.

I rejoined Interstate-44 and drove towards Chandler to get ahead of the Moore storm once again. Having planned on staying ahead of it for the rest of the day as this was my road home. Somewhere in the vicinity of Chandler, I realized that the storm was once again producing a tornado. While safely pulled over and observing the rain hidden updraft, I could barely make out a solid line of contrast. I could see the tornado, but just barely and it wasn’t photogenic at all.

It was getting late and dark and I didn’t want to take any chances with this tornado overtaking me. I shot back to the northeast, driving past the outlet shopping center near Stroud. It would be the last time that I saw this shopping center. The tornado leveled it down to its foundation within 5-minutes of when I drove past it. All that remains is a concrete slab.

As I made my way back into Tulsa I transitioned from storm chaser mode to storm spotter mode. I found a good spot just south of Sand Springs to monitor the situation. During storm events, local ham radio operators work with the National Weather Service. I made a call to the net control station over the radio and let them know my location. Over the next few hours, I witnessed more flashes, but never got a clear glimpse of a tornado. I notified net control of each power flash as it was indicative of a tornado going through power lines.

By midnight things had cooled down quite a bit and I drove home. The tornado caused some structural damage on the west side of the Tulsa metro. But, Tulsa had luck in her favor this day. The tornado roped out in the vicinity of Sand Springs before the supercell rolled across northeast Oklahoma 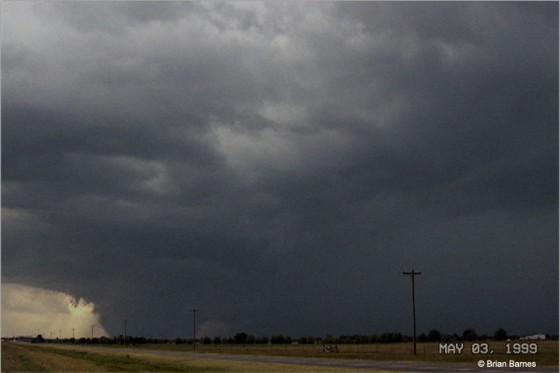