This was one of those days where a storm chaser can do pretty much everything right, get within a mile of a tornado and still not be able to see it due to the rain under the base and the terrible road network.

We started the day in Salina, Kansas and made the long journey to the Texas Panhandle. The day had tremendous potential.

A warm front lay across the Texas Panhandle with a dryline intersecting it southwest of Adrian. By late afternoon, a supercell formed and moved along the warm front.

It quickly became severe and tornado warned. Although reports of a tornado came in, we were directly under the circulation and only experienced rear-flank downdraft with a large amount of dirt being kicked up.

It’s quite likely that someone mistook the dirt being lifted by the RFD as a tornado and called in an erroneous report.

The storm moved northeast and became very high based and eventually died. By this time, we saw the tail end storm rapidly intensify and nearly anchor, so we blasted back southwest and arrived as the tail end supercell became intensely tornadic.

The supercell was well matured and the updraft base was completely wrapped with heavy rain. Unfortunately, the road network wasn’t in our favor and it was impossible for us to safely get a look into the notch of this incredible storm. 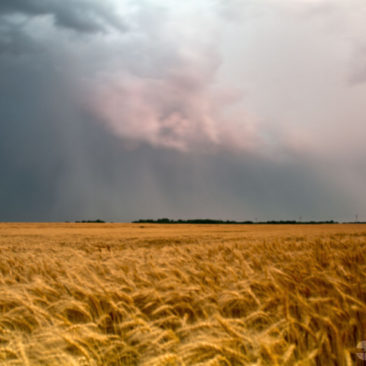