May 12th was an interesting day that brought a series of tornado producing supercells across parts of southern Kansas.  Strong low-level convergence was taking place along an intersection of a surface low, dryline and quasi-stationary boundary in southern Kansas to northeastward along a surface front that extended into central Kansas with deep layer shear of 35-55 knots and a very unstable air mass with CAPE values of 3000 j/kg in the warm sector extending across the southern half of the state.

I chose to play the triple point that was occurring in Harper County.  Which produced a couple of tornadoes for us.  Unfortunately, my camera’s battery was near dead and I was only able to capture a few structure images and the first brief funnel (which later confirmed to be a touchdown/tornado) before losing my battery. 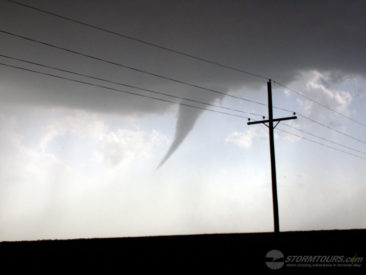